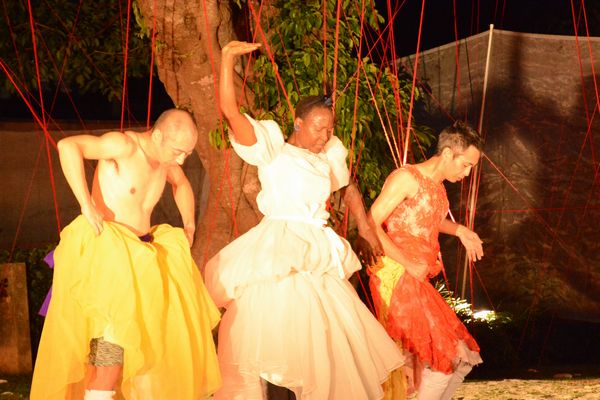 Final performance was hold at Ie Island. We visited Ie Island 2 times during a month residency, July 14th to 20th and 26th to 31st. Among 21st and 25th, we were at Bise.

July 31st was the final performance. The site of the performance was called “Usyapadumo”. It is outside open space in front of building of Ie Education Board. It looked like a circle shaped stage. The green grass is covering the surface and the stage was surrounded by concrete. At the back part of the stage, there were a huge Akou tree.

Usyapadumo have historical value as well. The site was used as an important place for ritual which has been gone already. The ritual is called “Upuuimi” At the ritual, a group of Sherman (every Sherman is women in Ie Island) make working tour to each sacred groves and make prayer at each spots. Usyapadumo is the place where Sherman gathered after their prayers were finished and they changed their ritual outfit. In the past, the site was also used as the trial. 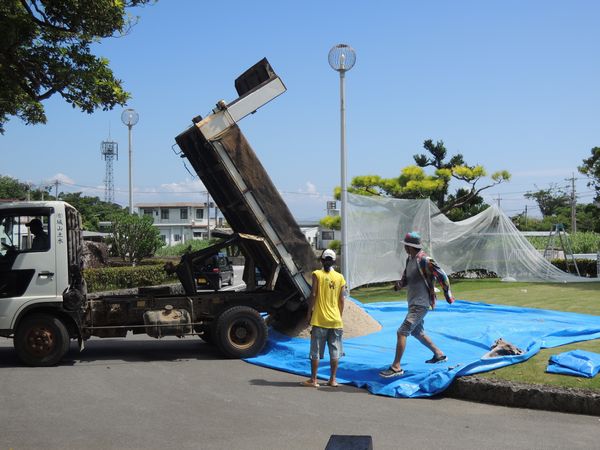 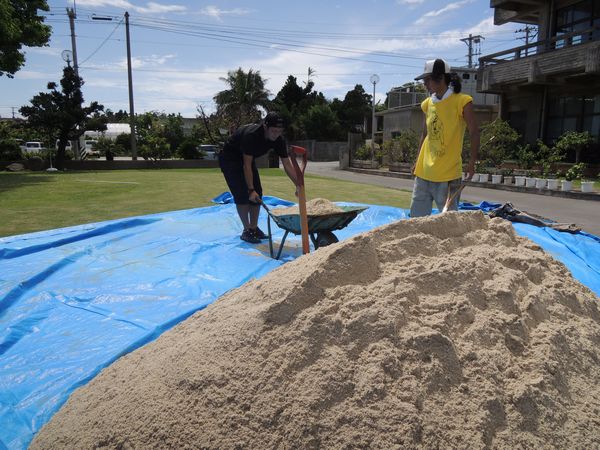 Nora decided to make an arrangement to the site and transform it to as artistic stage for the performance of contemporary dance. The general idea was using agricultural net and separates the space from the other. Cover the certain part of grass with coral. She was also interested in my work with red yarn. Since there were no red color at the site, she assumed that red yarn can make good color contrast with other objects. So she gave me an opportunity to make my work at the stage. However, when we actually started making a stage set, we faced to huge problem. Somebody told us that taking so much coral from the beach will against the law. First, we were planning to bring heavy machinery to the beach and gather corals, but it turns out that it is impossible to do it. So we decided to buy a tons of white coral sand from local company which will make similar visual effect as putting corals on the ground. Covering the ground with sand was actually way harder work than we imagined. It took more than 16 hours to accomplish it. 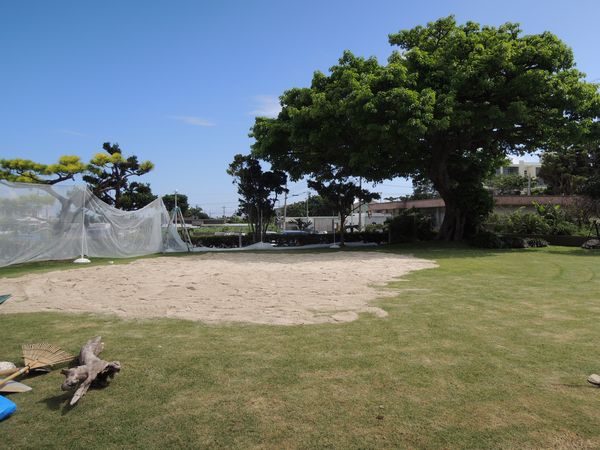 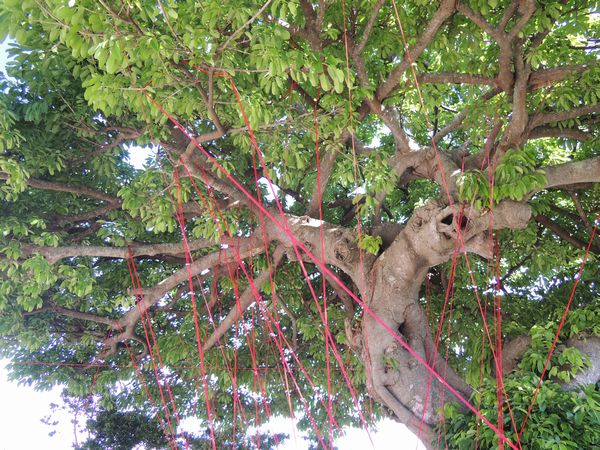 Nora also decided to change the costume to which more close to her idea. She sifted her idea to wear wedding dress so as 2 dancers. According to her, the piece is about feminine, wearing wedding dress symbolize the one of the most happy days of women’s life.

On the day of July 19th, Kengo, the officer of Ie Education Board who invited us to Ie Island, organized a walking tour for local. When kengo decided be part of this project, he made research about history of his local. Throughout the research, he found out that so many sacred groves were closed and related rituals have been gone. The history of Usyapadumo is also something he found out from the research. Kengo felt a shame that even local people don’t know the history of their land. So that he organized the event to reveal their own land. He invited teacher from Motobu culture and history center. During the walking tour, he told us amazing story. At the ritual which had been gone already, they put coral and made a road among sacred groves. What a coincidence! Nora’s idea was actually very ritual and matches to the history of Ie Island and the theme of the work. 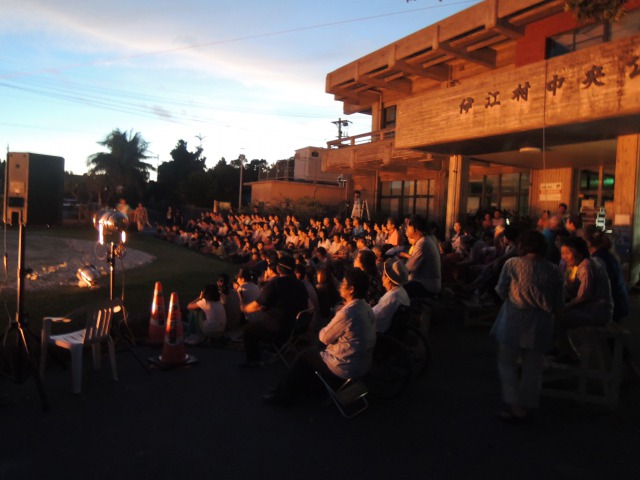 In Ie Island, almost nobody knows about contemporary dance, so it was very hard for us to assume how many will come to the performance. At first, we thought, if there are 100 people, the performance is successful. However, over 200 people actually came! And the age range of the audience was widely spread.
When the performance, everybody was very curious about it. Even little children kept quiet and concentrated on watching it. Actually, I am the person who watched their dance the most during this project. Although, I was not performing on the stage, my heart beat was keep running and the time just fly away so fast. However, when the audience gave the huge clap to the performers, I was very proud that I was able to be the part of this project and so proud of the great artists on the stage. 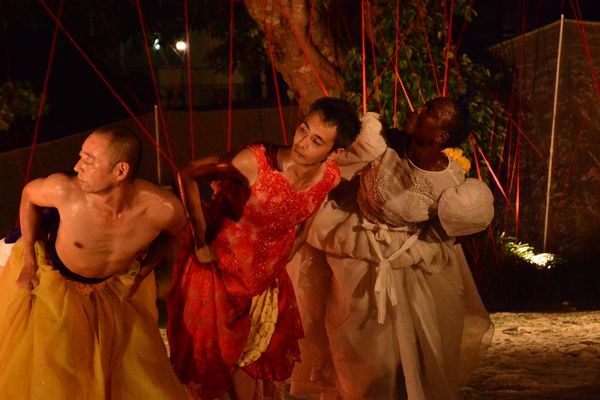 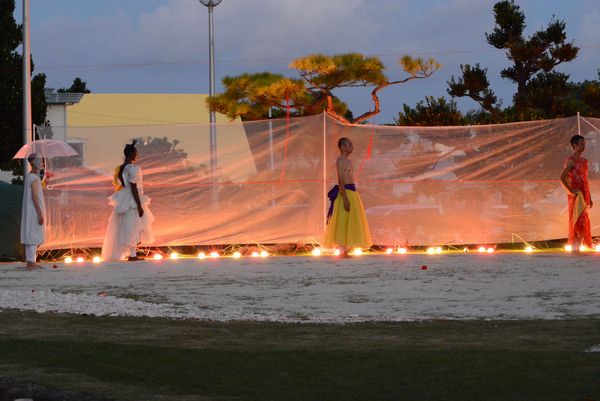 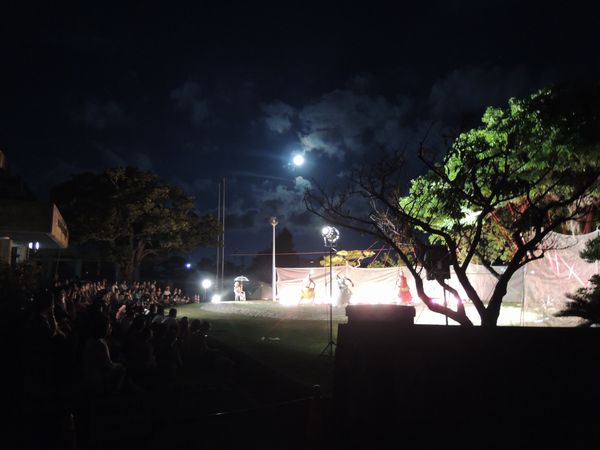 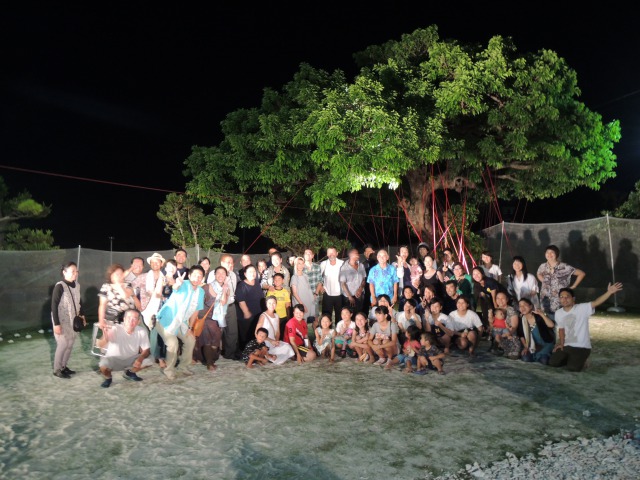